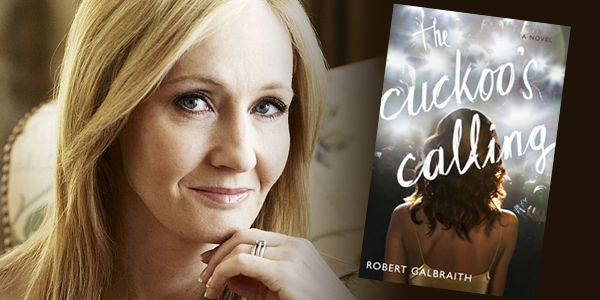 All the controversy and hand wringing surrounding the JK Rowling pen name debacle got me to thinking about pen names. Did you realize that even before Rowling wrote The Cuckoo’s Calling as Robert Galbraith, she used a pen name? According to her website, her official name is Joanne Rowling, but she chose to write under the name J.K. Rowling on the advice of her publisher. He thought young boys might not want to read a book written by a woman.

Officially, she has no middle name, but chose to use ‘K’ to honor her paternal grandmother, Kathleen. Rowling says she used the Robert Galbraith pen name so she could return to the beginning of her writing career without all the hype and expectations.

Using a Pen Name – It’s Not About Dishonesty

My good friend, Lee Goldberg, wrote under the pen name Ian Ludlow for his first four books, published while he was in college. Lee writes books and television shows. One of his most notable television shows is Monk. He’s also written many books, including The Dead Man (a monthly series), The Walk, and Watch Me Die.

I asked Lee why he used a pen name and how he chose the name. “I did it for several reasons,” he explains, “One, no one knew who I was. At the time, Robert Ludlum was the best selling author in America and using the last name “Ludlow” would put my books on the shelf next to his.”

Personally, I think that’s pretty smart thinking for a college-aged kid. He goes on — “I picked “Ian” for Ian Fleming. I figured people would go ‘Ian Ludlow, hmmm, the name sounds so familiar. I think I read something by him before and it was good’.” Lee told me that the publisher wanted the option to continue the series if he ever bowed out. This way, they could continue the on without anyone ever knowing Lee was gone.

Many authors use pen names, some of whom are quite famous.  You may not even realize the names they use aren’t their legal ones. Here’s a list of a few:

So, you see, there are lots of reasons for using a pen name. It really has nothing to do with dishonesty (or shouldn’t, anyway). While I have no problem with authors using pen names, I haven’t used one and doubt I ever would. My relationship with my readers is too important for me to use another name. In fact, the lead character in my Jack Davis Thriller Series has the same rare movement disorder I have.

You can get to know Jack and get a look into his dangerous world as he investigates crime by grabbing a copy of Triple Threat – a full set of all three novels in the Jack Davis series.

Trending – Co-Authoring a Novel or Other Work

Many authors have published books with a co-author in recent years. James Patterson does as does Clive Cussler and Janet Evanovich and many more. In fact, the prolific Janet Evanovich just co-authored a fantastic book with my friend Lee Goldberg entitled, The Heist. I asked Lee about the pros and cons of co-authoring and he says that he loves the creative challenge, the fun of working with someone else rather than being alone, and the chance to broaden his fan base. But that’s only the beginning.

Lee says every author has personal clichés. One example he gave was Robert B. Parker. “For instance,” Lee explains, “how many chapters or scenes has he ended with a character saying, ‘We’d be fools not to?’ You can’t take the easy way out when you have another writer working with you.”

As far as the cons of co-authoring go, Lee says that if you’re used to writing on your own, what you write might not fly with your co-author. “Your decisions will be second-guessed and you are likely to be rewritten. You might think you have a great notion for a plot move, but if your co-author disagrees you have to find a compromise,” Lee says.

And he reminded me that, of course, you have to share the money!

What are your thoughts on authors using pen names? What about co-authoring? Do you read books by famous authors where they co-author with a talented, but lesser known writer?